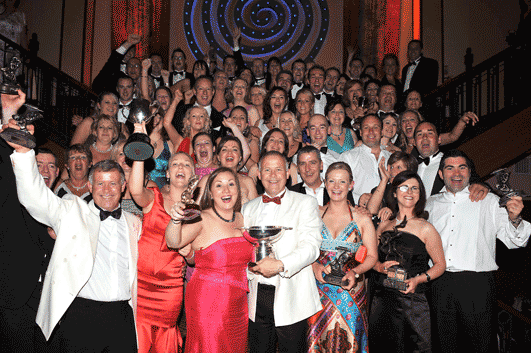 Ballinrobe Musical Society was formed in 1943, during the Second World War, and staged its first show in the spring of 1944.

Its aim was to provide an avenue of escapism for a community, weary from the drudgery of war, economic hardship and emigration. It is testament to the power of music, that to this day, despite all the advancements of the world and technology, the members and patrons of our society still use this avenue of enjoyment to entertain and be entertained.

It is hard now to imagine our town not being invaded for one week every year by cowboys, gangsters or pirates with nothing more in mind than joyful music, song and dance.

After its establishment and four productions during the 1940s, the Society lapsed, giving way in the ‘50s, and particularly the ‘60’s to an avid interest in the art of drama, which manifested itself annually in the Ballinrobe Drama Festival.

The 1970s saw the pendulum swaying once more in the direction of musical drama, with the late Dr. Christy Guckian, RIP, presiding over the rebirth of the Society.

To all those who have served the Society since its inception, both on and off stage, we say thank you for the legacy. We hope that this beautiful thing which you have created and nurtured will continue to be celebrated for one week annually in the town, for may years to come.